Since I am not yet better, I thought I would tell you my cycling history. And why people who know me a long time might have been surprised that I became such a consistent cyclist.

I started on a kids bicycle, I can not remember the colour, with training wheels until we visited an aunt and uncle (of my father) who live in a village in a street with very few cars. That’s where my sis and I learned cycling without training wheels.

My childhood memories of cycling are spotty. I can remember my mother cycling everywhere and especially to University and back, I remember bicycle day-touring with my grandparents. And one tour only with my grandpa, who I felt was pedalling very slow, and his big smile rolling down a hill. Then there was at least one-time cycling with friends and my sis to the swimming pool.

After we moved to Berlin, cycling got less. When I was around 12/13 we got new bicycles, adult-sized. My parents bought them in Lübeck when visiting my grandparents and my sis and, I took them on the train back to Berlin, while our parents drove all the luggage in the car. I cannot remember cycling with it much, though. That changed when I moved to the south of Germany for fashion-school. So I took it out of the cellar, spray painted it, and got it checked out in a bicycle shop. Then I and the bicycle got on a train with a small backpack and travelled 10 hours by train, just to notice when I wanted to cycle from the train station to my place, that I could not. The checkup wasn’t very thorough, I guess. Luckily my new landlord was able to fix it. So then I started cycling to school and pretty much anywhere else.

Until it finally broke down after about a year. So I bought myself a new bicycle… and made a huge mistake by mail-ordering it based on looks. So I got a pretty bicycle I did not feel comfortable on, and because I already got used to walking and taking the bus, I stopped riding. It moved back to Berlin with me, got a check-up and moved to University with me, never made it out of the garage, and moved back. It even moved to this apartment with me and patiently waited in the cellar. While I was starting to think I should cycle again, it would save time and bus money. But the first time cycling after almost 10 years was because I was running late.

Actually, I had left right on time to get on the bus to work, but I forgot my wallet. So when the bus came, I could not get on it. What was I supposed to do? Even running I would probably be late, so I ran home and took the bicycle out of the cellar and hoped it was true what they say: That you can not forget how to ride a bicycle when you once have learned it. And it is true. I still almost fell within the first 5 meters. I was wearing flared pants, you know that I like bellbottoms and boot-cut-pants, and they got tangled in the cover of my bicycle chain. So with one rolled up pant-leg, I got to work, only a minute late, and back. And I noticed I did not like the saddle, I was moving around on top of it, and my general sitting position. So I spent some time trying to fix that, but never felt comfy with it, and then the rear tyre got flat…

I know it is not the end of the world, but for me, it was a sign. I would need a new bicycle. And this time I would buy it in a real bicycle shop. After peeking through the window at one night, I noticed bicycle are a lot more expensive than I thought. So I adjusted my budget and went there with 2 additional requirements for my new bicycle: a backpedalling brake and an upright sitting position. 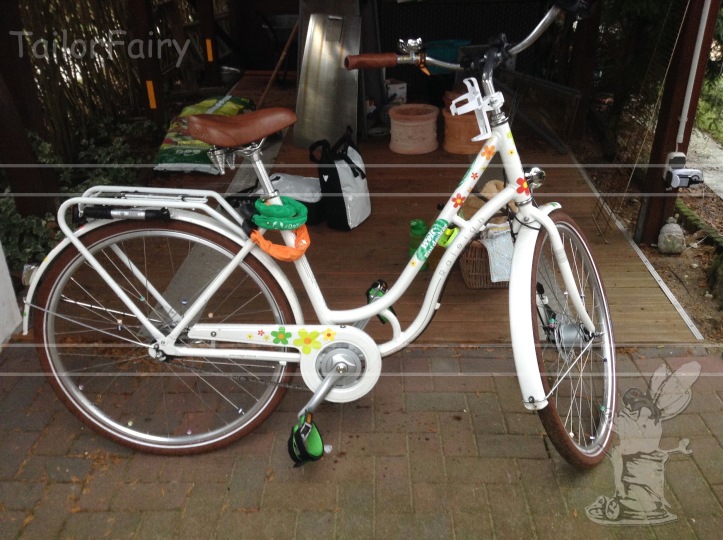 That is how I got Leif. As you might know, he also has a new saddle by now and new grips. He is very trusty and did always everything I asked of him, but he is looking forward to getting support by a touring-bicycle, with a half-sporty sitting position. Yeah, I know, I changed my mind, but I still prefer to sit upright when cycling in the city. The new one also needs to be a little bigger, since Leif is a little bit small for me. What I never will change my mind about is the backpedalling brake. 😉  Even though that means I will have lesser gears and keep pushing up mountains.

The pink bicycle I gave away to a charity for refugees. I hope it found someone that finally likes to ride with it, it wasn’t its fault that we just did not click.

Well, I hope this was interesting for you. Do you have any questions about this? Or requests for other history posts?