this was a lot more adventurous than anticipated

Today Button, Charlotte and I cycled to Lübeck again. Since I found a good route, we always cycle the same streets, lanes and ways, so I did not pack any maps. But lots of raingear, since the forecast said rain all day. This was actually true, but I still left content because I expected emptier bicycle lanes. The first construction site I was almost expecting, they had been working on that part of the street a while, and they always kept a path for pedestrians open, so that meant a little bit of pushing, but no alternate (longer) route. A little later, we weren’t so lucky. The cars were allowed to go through, but they closed the bicycle lane, and they showed big rerouting signs, which let me a long way (additional 4km) back to the street… through the woods. They redirected bicyclist planning on paved roads, this way:

So pushing again, trying to find safe footing… When I got back on the road, they sadly did not put any signs up, where they rerouted you, and you had to figure out, if you could pedal on straight or if you needed to cycle back.

Then I had some normal km to cycle, where I even met up with a friend. But I was running late… and the sun goes down around 5pm at the moment. So back on the road and into the next road-block, with no real rerouting suggestions, I tried to find my own, which first got me back into the mud: 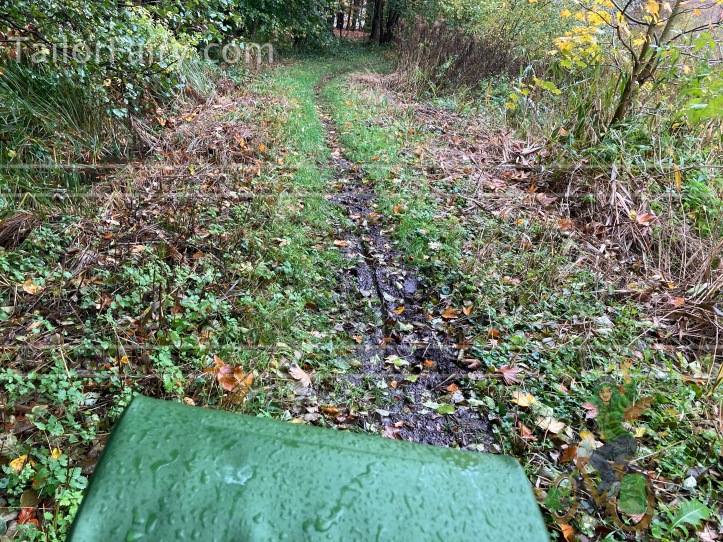 And then on top of a bridge – over the path, I needed to take. So this time: stairs! Unloading Charlotte, carrying everything down, getting everything onto Charlotte again.

Next up: puddles. Lots of them, my pants are now ending in brown polka dots. But at least I could take the planned route.

One of my breaks inside of a bus station.

Well, by still cycling so late, I finally got to use Charlottes lights for the first time, and it is bright. Also very wide, which is wonderful, but I always thought there was a car coming up behind me because there was so much light to the left.

I am kind of proud of myself of not giving up and just turning back or taking a train but reaching Lübeck by bicycle. 😉