my planning keeps going on.

If you are just joining, here is the beginning of this series.

Today I wanted to tell you a little bit about the tour I have planned:

I want to cycle part of the Danish Baltic Sea Bicycle round tour. I plan to start and end in Flensburg, which is so close to the border it’s almost danish and I can easily reach by train. Then I will pedal across the border and around the lillebælt, by taking some ferries to get from island to island.

this is a screenshot from google maps for all of you not as familiar with Europe with a wider surrounding area, so its easier to understand where I am talking about. You can see Germany with Berlin and Hamburg, Amsterdam in the Netherlands, on the left a small part of Great Britain, and Poland on the right side of this picture. On the top its Norway and Sweden. Denmark in the middle, of course 😉 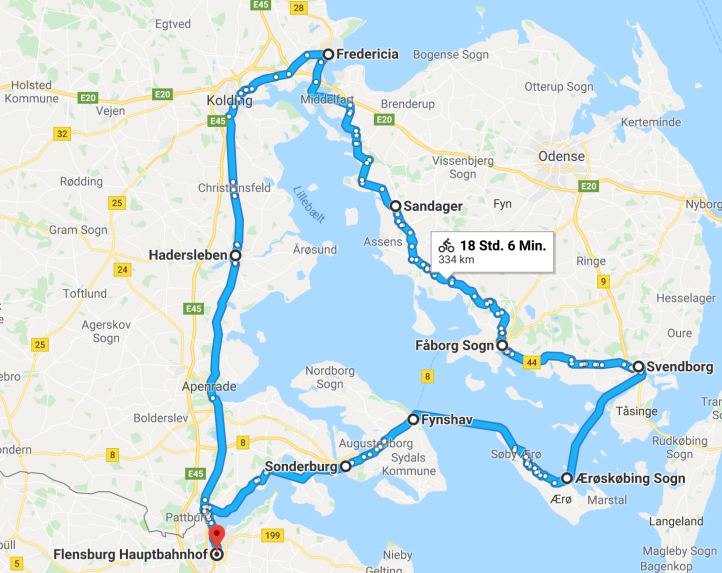 and here the more detailed route, also thanks to google maps. Which isn’t exactly my planned route, because Google does not seem to know all the bike routes in my book/bicycle map, but it gives you a general idea 😉

Instead of pedaling for 18 h and 6 mins, google thinks I cycle quite fast, I plan to take it slow and allow me some days to make the trip (about 8 at least). I want to have enough time to enjoy the trip and all the great things I will see along the way. I am not in a race 😉

So much still to plan and prepare…

Do you have any questions or suggestions so far?