Happy Easter! I hope you all had a wonderful Easter Sunday and found a lot Easter Eggs!

This is a weekly post series about me preparing for a bicycle tour. If you want to read from the beginning and didn’t already do so, you can find the posts here: the idea, the planned tour,  some of my gear, my packing list,  Buttons seat+more gear,  planned blog posts while on tour, new fabrics and gear, tent, tenosynovitis

only 2 weeks left to prepare…

My tenosynovitis and the pressure on my pubic bone when sitting on my old saddle decided that I need to invest in new grips and a new saddle before my tour.

I actually thought it about it for a while now, mostly the saddle, since I just slipped up and down the seat, or if I had the right seating, it put pressure on my pubic bone. So I was already looking and collecting information when those thumbs started to hate me, and I feared I would have to postpone my tour.

So I started looking for bar-ends, so I could change my grip more often and give my thumbs more rest. I often thought while cycling I would love bar-ends on longer tours. And I found ergonomic grips with bar ends from the same company that produced the saddle I decided to buy. So I spent a huge amount of money on:

As you can see the company I bought this from is named ERGON and those are the ST Core Prime woman saddle and GP5-L grips. And sadly they only come in black… which isn’t exactly my favorite color 😦 but I already found a solution, you will see in a few pictures.

(well to be fair, the grips also come in cork+black, but the saddle only in black) 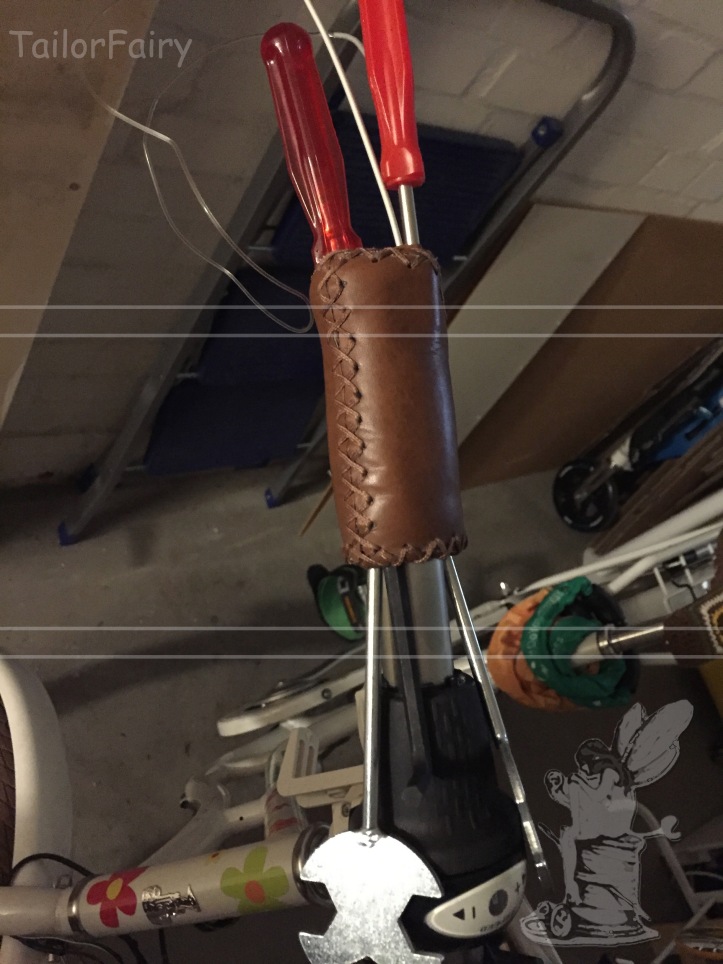 It took a lot of screwdrivers to loosen the grips and a lot of force to pull them off the handle-bars. If I ever were to do that again, I need somebody to help me by just holding the handle-bar while pulling them off. I had to take quite some breaks and now my other fingers hurt, too.

But I finally got them off and the new ones on:

Leifs new look! I took a short test ride today and it feels pretty good. I have to get used to the new saddle though, but I think it will only take a few days. It’s mostly just sitting on a different part of the saddle, then with my old really wide one.

And did you find my solution for the color? Yeah, funnily enough, I hardly can dress and undress, do the dishes and do a lot more things, but I can crochet. The covers for the grips are already a work in progress.

While I was shopping for Leif, I also got him a new bell. A really tiny one:

Which I had to use on our short test drive and it ringed like a big bell. But I definitely like the design better, and that it is so tiny. 🙂 This one is from BellFan.

You might wonder, why I even have to have a bell, but that’s one of the rules bicycle have to fulfill if they want to be cycled on German streets: They have to have brakes, a bell, a white light + white reflector in the front and red light + reflector at the rear, and reflectors in yellow or white at the tires.

I am still pretty nervous about my thumbs and all the other stuff that could go wrong, but I am an optimist at heart so I have to believe that what I do is enough to heal the thumbs up enough to cycle in 2 weeks and 2 days and that everything else will also work out. I really want to do this tour!

Anyone having any tips? About bicycle tours or how to heal tenosynovitis? Any tips are highly appreciated.